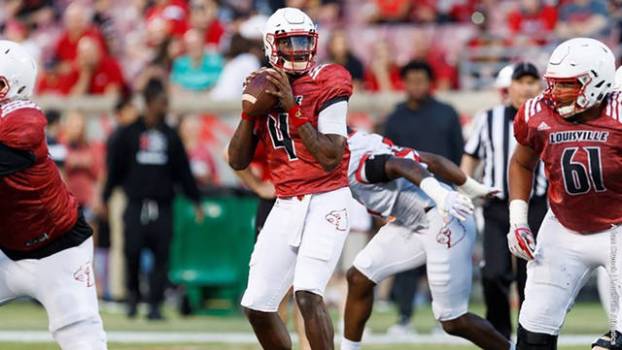 Jawon Pass looks down the field for an open receiver. Pass will replace the Cardinal superstar Lamar Jackson behind center this year.

LOUISVILLE — The University of Louisville football team was picked to finish fifth in the Atlantic Coast Conference football preseason poll, the league announced on Monday afternoon.

The poll of 148 media members was conducted during last week’s 2018 ACC Kickoff in Charlotte, North Carolina. The group selected Clemson to win the Atlantic Division and Miami to capture the Coastal.

Louisville opens the season under ninth-year coach Bobby Petrino, who has guided the program to a 117-48 record, against defending national champion Alabama on Sept. 1 in Orlando, Florida. The team returns to the newly renovated Cardinal Stadium for its first home game on Sept. 8, taking on Indiana State.

The Cardinals return 15 starters from last year’s team that posted an 8-5 record, including going 4-4 to tie for third in the Atlantic. Louisville capped the year with a bowl game for the eighth-consecutive season.

Wide receiver Jaylen Smith, who earned first team all-ACC honors last season, leads an offense that boasts seven returning starters. The senior, despite missing three games due to injury, hauled in 60 passes for 980 yards and seven scores in 2017. Smith and Dez Fitzpatrick, who caught 45 passes for 699 yards and nine touchdowns, were named to the Biletnikoff Award Watch List.

Defensively, Jon Greenard and Dorian Etheridge lead a unit with five returning starters. Greenard had a solid sophomore season, playing in 13 games and totaling 15.5 tackles, with 7.0 sacks. Etheridge starred as a freshman last season, starting all 13 games and leading the team with 83 tackles. He was tabbed a freshman All-American by ESPN.

Specialists Blanton Creque and Mason King headline the special teams unit, with Creque coming off a season in which he went 17 for 20 on field goals to earn all-ACC honorable mention accolades. The junior contributed 109 points last season, and he ranks fifth on the school’s career list for points by kicking.

The Atlantic and Coastal Division winners will meet in the 2018 Dr. Pepper ACC Football Championship Game on Dec. 1 at Charlotte’s Bank of America Stadium.