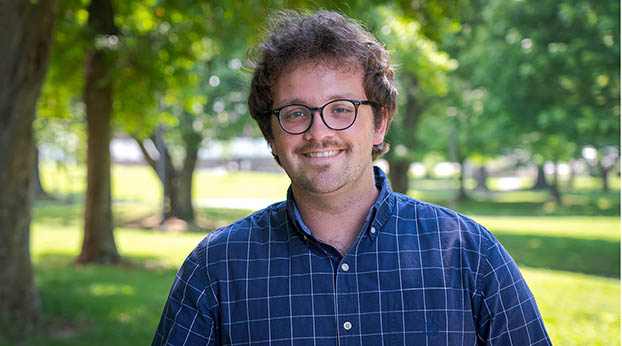 Andrew Swann says goodbye to his studies at Walters State Community College as he pursues a divinity degree this fall as a grad student at Yale University. (photo submitted)

Andrew Swann says he wasn’t quite sure about college life when he first enrolled four years ago at Walters State Community College.

“I did not know what I wanted to do. At Walters State, I found a place to reflect and to meet students and teachers who had taken different paths through life,” said Swann.

It didn’t take long for Swann to settle in and make a mark for himself. He earned two scholarships – the Tennessee Hope Lottery and the Tennessee Promise – guaranteeing that his first two years at WSCC would be tuition-free.

Swann earned his Associate’s Degree and, this spring, completed two Bachelor’s Degrees at the University of Tennessee – one in political philosophy and the other in religious studies.

He says he has always been interested in philosophy and the New Testament.

He explained his take on political philosophy as the study of the foundations of political thought by reviewing, for example, documents of the founding fathers and ancient thinkers as a way to delve into the subject.

All that hard work has apparently paid off. Swann is headed to Yale University this fall, one of the nation’s most prestigious institutions of higher learning. He is enrolled in the divinity school with an eye on absorbing all he can in theology and political philosophy.

Money won’t be much of a factor since Swann was presented with a financial aid/scholarship package by Yale that will ensure that worries about tuition and other expenses won’t get in the way of his studies.

While at Walters State, Swann excelled in his studies and was quite the exceptional writer.

“Andrew was an excellent English student. He had big, philosophical ideas and the writing prowess to express them with precision and grace,” said Chippy McLain, Dean of Humanities and Associate Professor of English at the college.

McLain is one of three professors Swann credits for challenging him to bear down on his studies and work hard. The other two are Laura Ritter, Assistant Dean of Humanities and Director of Choral programs, and Roger Turner, instructor of philosophy.

“Walters State is great because the teachers offer so much time to students. I found out that I shared many of the same passions and took independent studies that allowed me to work closely with those professors,” said Swann.

His grades likely played a bit of a role in the desire of Yale University to actively pursue the hardworking student for inclusion on the short list at the Ivy League college. Swann’s work with nonprofit agencies most likely played a factor as well.

“I work at the Alliance for Better Nonprofit Organizations. Yale does value experience with community service, church and faith-based organizations. Sometimes, it’s a financial sacrifice to serve with nonprofit organizations, but the benefit is worth it,” said Swann.

He doesn’t seem to be taking much of a summer break while waiting to make that momentous trip to the Yale University campus this fall. He is using the time to learn German and Latin so he is ready when he hits those Yale doors running.

Three arrested on drug, other charges

A lengthy investigation by detectives of the Claiborne County Sheriff’s Office has netted the arrest of three men charged with... read more