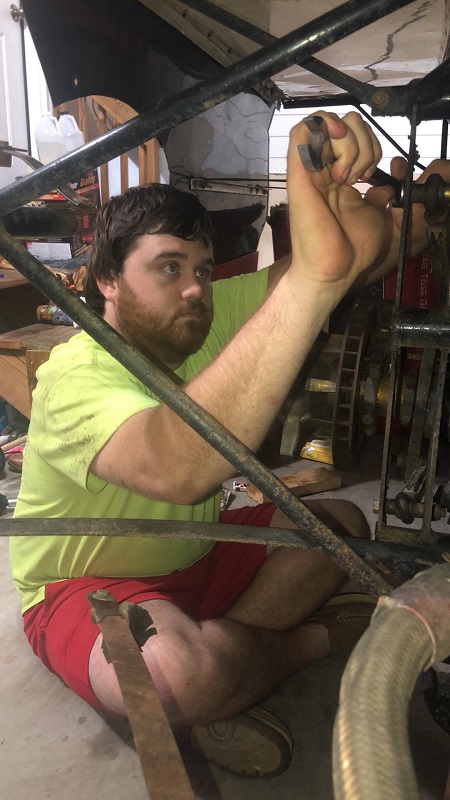 Matthew Holt is the son of Jeff and Michelle Holt. He was brought to the track as an infant and he has the love of racing still today.

Matthew “The Thorn Hill Kid” is now an active driver on local tracks and is making his dreams come true. He is turning wrenches and chasing his dreams on the dirt tracks around the East Tennessee area.

His love of speed was first seen as he drove his yard kart around in circles on two wheels. It wasn’t long before he was provided a racing kart to pilot and then his dad purchased a 2003 GRT late model; however, he soon transitioned into a 2015 Warrior.

During his first race he finished 23 out of 25 cars. At the time he received help from his parents, Shanna and the Late Lynn Holt.

Holt spoke about his help now, “I have a great crew. My mom and dad, my wife Brittany and my kids Eli and Emma. I hope some day Eli will follow in my footsteps.”

He has never forgotten Lynn Holt and has run a tribute sticker on the hood of his car for years, “I have had a tribute to Lynn on my hood ever since he passed away and on June 9 it was six years since we lost him.”

Holt’s best moment in racing was his first win in 2015 at Tazewell Speedway and racing with the Lucas Oil drivers. His worst moment was during a Schaeffer’s Oil Race weekend. He had a very good shot at making a $10,000 to win race and broke a control arm.

Holt has a couple of wins in karting and the one win in a late model. He hasn’t won a championship yet but seems to have a strong desire to win more races and in turn a title is possible.

When asked Holt gave advice to young drivers, “Give God all the credit and glory for letting you fullfill your dreams of racing. Always be social to the fans and the people around you. Remember, you may be an inspiration to others and remember someone (kids) is always watching you. Don’t ignore the kids down at the fence before the race, give them a wave, the reaction is priceless.”

Holt explained his choice of number this way, “The first race car we got from Mitch Houston had number 22 on it. I ran the car a few times and put new body on it in 2012 and got it wrapped and was supposed to have changed it to #00 but I forgot to put it on the paper and that’s what Rex Coffey put on the car because he and everyone knew me as the number 22 so it just kinda stuck I got rookie of the year as well.”

The Thorn Hill Kid has a love for dirt racing and he will continue to turn wrenches and chase his dreams hopefully one day passing his passion down to his kids.

Doc Petty was a great person. That’s said about many people but Petty had a history of doing good things... read more