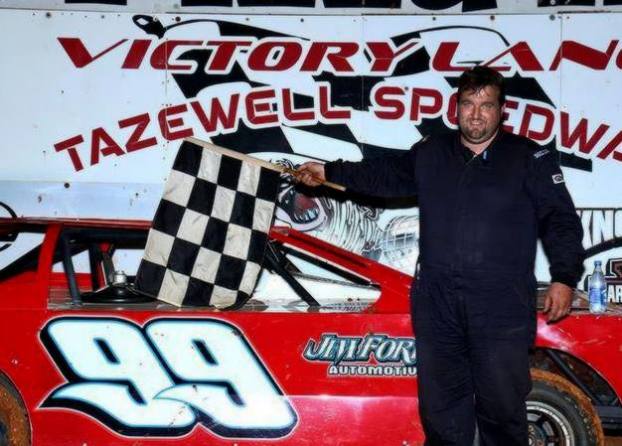 Chuck Mcmahan has been driving fast around area race tracks for nearly 20 years and he’s no stranger to turning wrenches in order to chase his dreams.

Mcmahan was introduced into racing by his grandfather Gabby Williams and he turned that introduction into a very successful racing career. His parents are Teresa Williams and Ricky Mcmahan and he has one daughter, Mason.

Chuck spoke about his first race, “My first race was in 2003 but I did not finish.” That likely fueled Mcmahan’s resolve to get better.

Early on it was Mcmahan himself and his brother Richard along with a few friends that helped him turn wrenches when he first started.

However, there are others that currently help him including Kurt Owens, Tyler Woodson, Jim Ford and Bob Russell.

Mcmahan has some loyal sponsors, none more important to him as Jim Ford Automotive, Koontz Plumbing and Lowe’s Auto Parts. He pilots his number 99 four cylinder around local tracks including Tazewell Speedway and Volunteer. He knows how to set up the car and can drive it to the limits.

Chuck remembered his best moment, “I think my best moment has to be when I won my first race during the 2006 season.”

Mcmahan loves to race and he feels he doesn’t have a worse moment likely because of all the success. Chuck has 104 wind and five championships.

He thought about who he would like to thank and his comment was, “I’d like to thank my grandparents, my family, Kurt Owens, Bob Russell, Jim Ford and anyone that has ever helped me.”

His advice to others just starting out is simple, “Never give up.”

Mcmahan began his career by running karts and he started running the 99 back then and it has stayed with him. He’s one to beat when he pulls through the gates and he turns the wrenches well and that allows him the ability to chase his dreams. In the future he wants to run street stocks on a regular basis as well as his four cylinder.

Claiborne and Chuckey-Doak battled on the pitch, August 24 and it was the Lady Bulldogs getting the 3-1 victory in... read more