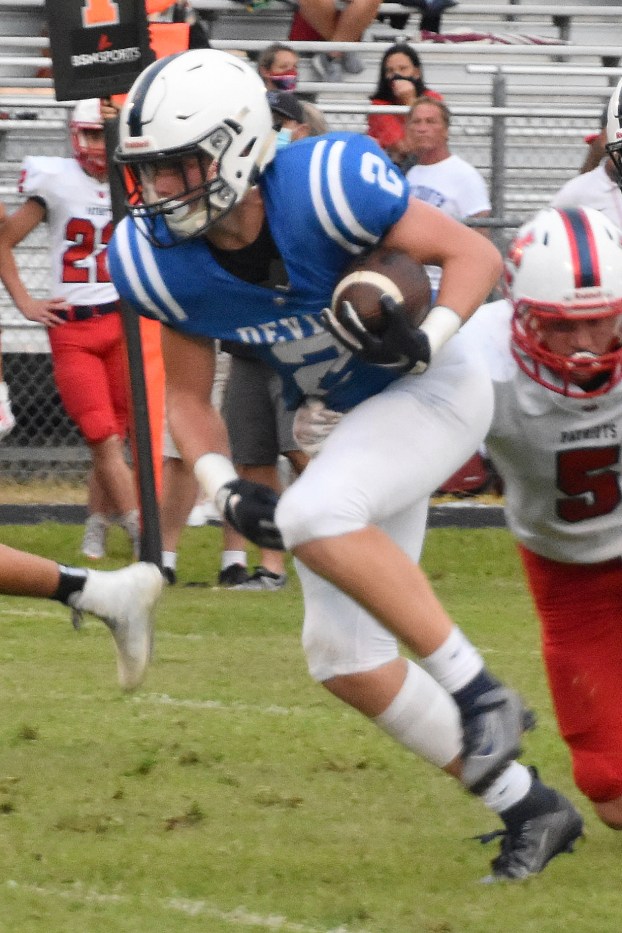 Timmy Del Ervin has been a constant performer for the Bulldogs

The Bulldogs of Claiborne County was looking for a great start to the season with three wins in a row but standing in their was was a long bus trip to Unaka.

The Bulldogs needed to get off to a fast start to help with their confidence. Storm Livesay began where he left off last week by finding the end zone on a six yard rushing early. The point after missed.

The Bulldogs defense once again was playing great and they shut out the Rangers through one quarter of play.

Claiborne found pay dirt again this time on the legs of Timmy Del Ervin’s 22 yard run. The point after was kicked through the uprights by Alex Bailey giving the visiting Bulldogs a 13-0 lead.

Eli Stone then scored on a eight yard run and Bailey’s point after made it 20-0, Bulldogs.

A Landon Ramsey pass to Daniel Shearl was the Rangers first score but the two point conversion failed.

Claiborne countered the late first half score by the Rangers with another one on 36 yard pass play as time expired. It was Stone to Lester this time and the point after kick was good making it 27-6 at the half.

After the break, Livesay ran for his second of the night covering 14 yards but this time the point after was missed, 33-6.

Ervin then scored his second touch on the night traveling five yards but again the Bulldogs missed the point after. The third quarter ended with the visitors leading 39-6.

During the final quarter, Claiborne scored once more on a defensive touchdown when Josh Bolton returned a fumble 64 yards and Bailey kicked the point through making it 46-6 which represented the final score and made history. For the first time in the history of Blue Devils or Bulldogs football they will begin a season with three consecutive wins.

Medlin spoke about the game and how his team played and will prepare for Unicoi, “The boys played great tonight after a slow start. Traveling on a bus a couple hours sometimes is tough to do. Defense played lights out only giving up 97 yards, so much fun watching our boys play when they are having fun. I am so proud of our leadership that our guys show throughout the game, its great seeing them cheer on their teammates. Offensively we were able to move the ball well, offensive line did a great job opening up some holes. We have a huge game next week at home, our focus is on Unicoi county and trying to make sure we are prepared to play them.”

To many fans the Friday game against Unicoi will be one of the biggest games at Claiborne in the history of the school with the opportunity to improve to 4-0 on the season.