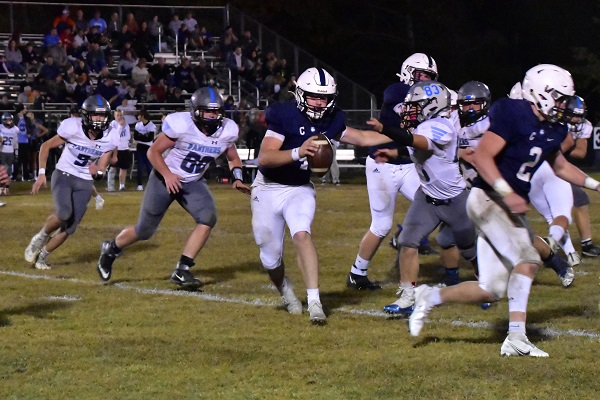 The 9-1 Bulldogs open the playoffs at home this Friday. Kickoff will be at 7

Breaking down: Bulldogs versus Tigers

In a strange twist of fate, the very first team they were set to play in 2020 will be the one they open the playoffs against.

Earlier this season Pigeon Forge was scheduled to be the first opponent for the Bulldogs but stormy weather and heavy lightning forced the cancellation of the game and a no contest designation.

The Tigers are a very good team with a 6-3 record with noteworthy wins over Grainger and Austin East.

They are ranked 15 in the current 3A All State Rankings (MaxPreps).

Claiborne has had the best ever season since changing from Devils to Bulldogs. They have nine wins and a single loss to Johnson County.

That contest was one that they’ll look at with much regret as they led late and their own mistakes handed the Longhorns a victory.

Claiborne has great wins over Unicoi and Chuckey-Doak and others. They are now ranked 22 in the 3A All State Rankings (MaxPreps).

Defensively both teams have similar amounts of shut outs and both play very well.

Coach Nathan Medlin talked about the game, “Pigeon forge is a really good football team, their defense is tough. Offensively Coach Meadows does a great job of running their offense and they have been getting better each week. I feel like Pigeon forge is one of the toughest teams we have played this year. They have some talented lineman and have special skill position players that make some big plays when they get their opportunity. They will be tough to move the ball on. I think we match up pretty well, and it will be a battle.”

Medlin added, “In order for us to get a win, we have to play extremely hard, giving tremendous effort all night. Everyone has to do their jobs and make sure we are able to trust that everyone is going to do what they need to. I hope that our boys enjoy this game, its special when you make playoffs and even more so being able to host a first round game.”

The numbers appear to trend slightly in favor of the Bulldogs on both sides of the ball but high school games often come down to who wants it the most; therefore, expect a good, well played football game.

The Claiborne Bulldogs football team was in position to finish the season on the top with a win over North... read more