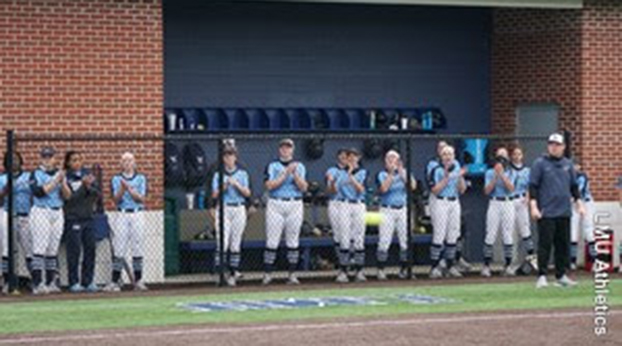 HARROGATE, Tenn. – Whereas the remainder of the regular season only stood at six more games for the Lincoln Memorial University softball team at the beginning of the week, that figure has now changed to ten with the addition of two more doubleheaders from Dorothy Neely Field scheduled for next Tuesday and Thursday.

Once the Lady Railsplitters (25-4, 13-3 SAC) take part in their first outing in eight days on Wednesday vs. Anderson in a matchup between the top two teams in the South Atlantic Conference standings, LMU will visit Limestone the following weekend before hosting King and Lenoir-Rhyne on April 13th and 15th respectively, which will begin a streak of the final six games all taking place in Harrogate, where the blue and gray has not tasted defeat in over 14 months.

The Lady Railsplitters were initially scheduled to meet L-R last Friday at home, however, the Bears were forced to postpone due to a COVID-19 outbreak that littered the roster. The makeup date has been scheduled for next Thursday, but not before an impromptu DH 48 hours earlier also at Dorothy Neely Field against King, whom LMU vanquished in Bristol, Tenn. back on February 24th by margins of 3-1 and 7-6.

Head coach Ritchie Richardson‘s unit, currently ranked 7th in the latest National Fastpitch Coaches Association poll, eclipsed the greatest start to a season in school history after their 24-1 start, bookended by a pair of 12-game winning streaks. After facing a bit of a lull in the form of three losses out of their last four appearances since then, LMU will return to action against Anderson on Wednesday having last split with #13 Young Harris in Georgia last Tuesday.

LMU has been phenomenal when playing on their own field over the past two seasons, carrying a 21-game Harrogate winning streak into tomorrow’s crucial SAC doubleheader against the Trojans. Going 13-0 at home thus far in 2021, the Lady Railsplitters have outscored their opponents by a combined 93-22 difference when playing at Dorothy Neely Field.

Over their last four appearances at home, LMU pulled out consecutive sweeps over Mars Hill and Queens by a ridiculous 34-0 margin in total, before then sweeping Carson-Newman in Jefferson City the next week to reach six straight shutouts to hit the aforementioned 24-1 record.

The Lady Railsplitters prevented their opposition from securing a run in 39 consecutive innings before falling victim to a sweep at the hands of Coker, which then led to the split against Young Harris 72 hours later.

With their final 10 contests of the regular season cemented thanks to King and Lenoir-Rhyne coming to town next week, LMU will gear up for an important 10-day period before entering the SAC Tournament, aiming to stay at the top of the conference as the end of the road draws nearer.

ROCK HILL, S.C. – Fresh off one of the most successful head coaching debuts in school history, the Lincoln Memorial... read more