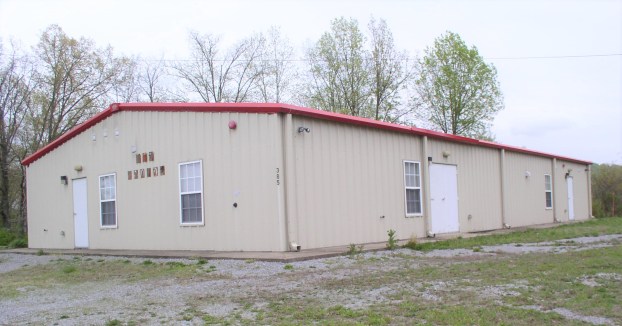 The Claiborne Commission did a 180 during its June meeting, voting to purchase this metal building to house inmates entering the Helen Ross McNabb drug abuse program. Shown is the outside of the 6 year old structure as it looks today. Photo: Jan Runions

It took a bit of time and a lot of talk, but the Claiborne Commission has finally said ‘yes’ to the purchase of the metal building to house the Helen Ross McNabb female inmate drug program.

The simple majority vote last month to forego the purchase of the Pump Springs Church owned property did a turnaround with three former naysayers deciding to change their votes.

Commissioners Juanita Honeycutt, Mike Campbell and Stacey Crawford added their ‘yes’ to 10 of their fellow board members making the final call 13 to 8.

The plan is to have two deeds drafted – one that will show county ownership of the property. The county will then deed the property to the McNabb Center with the caveat that the property reverts to the county if the program fails or if McNabb decides to discontinue it for any reason.

County attorney James Estep III gave his thumbs-up to the suggestion that it be stipulated that McNabb will be liable for any insurance.

“This is not a contract. It’s a deed. They’re the owners,” said Estep. “The more you add, you’re getting more into a lease type of situation. You need to deed the property outright. The more conditions you add, the more exposure you have to liability. You don’t really want to maintain a lot of control.”

County mayor Joe Brooks added that McNabb cannot sublease to just anyone. If they do, it must be something specific to the program.

“Can one safely say that Claiborne County is not in the mental health treatment business?”

Brooks said the county is simply partnering with a grant.

It all began in October, when the commissioners unanimously voted to the purchase. Then, some six months later, 11 of the 21 commissioners voted not to buy the structure.

The vote left many shaking their heads with jaws dropped at the seemingly last-minute decision not to move forward with the $175,000 purchase, especially with it being a caveat to the final decision by ARC (Appalachian Regional Commission) to grant the county the money to set up the innovative program.

“Part of the application for the grant was the purchase of the building. Without purchasing the building, we lose the grant,” said commissioner Shuford, at the time. “There was discussion (at the Claiborne Commission meeting) that, like any grant, Joe (county mayor Joe Brooks) says ‘you have to put some skin in any game.’ A part of our ‘skin’ was to purchase the building.”

Shuford says he specifically asked and was told by Brooks at the time of the initial discussion months ago that the grant required a purchase commitment.

“I said ‘okay, so why don’t we just earmark this money to spend on this building and then submit the application. Once we find out if we get the grant or not – the money’s already earmarked and we can purchase the building at that time,’” said Shuford, during a previous interview.

The building was in good shape and carried a clear deed. Area factories were onboard with the work program, as were the judges and the attorney general.

Anyone participating in the program would be required to sign a waiver assuming their own risk.

“Once accepted into the program, they will no longer be under county liability,” said Brooks, during the April meeting. “Any infraction will result in the immediate return to jail and likely a lengthening of their sentence.”

Many of the same questions surfaced during a workshop on June 7. Commissioner Large voiced her concerns about safety issues, especially overnight when the inmates would not be supervised. She asked whether the security cameras are constantly monitored.

She was told they are not but that they do record 24/7 for playback purposes.

Large was told by Sharon Reid, who is the director of Hamblen County McNabb Services, that the program is geared at providing coping skills rather than relying solely on a counselor to resolve issues.

The program is designed for nonviolent inmates.

Commissioner Brogan said during the workshop that he was still unclear about the budget side of the program, especially the salaries shown for the initial 18 months of the three year program.

Mayor Brooks said the first seven months will be spent getting everything in place before the first cohort of women is brought into the program. Only at that time would salaries begin to be subtracted, he said.

“The first 18 months is the reportable period for the data to justify them giving us the money. The remaining money is still there for the remaining nine or ten months of the program,” said Brooks.

Dan Spurlock, who oversees the Stand in the Gap Coalition, was asked to act as a consultant. Spurlock said that he felt the building is not overpriced.

“The building is commercial grade, 3,000 sq. ft. with 25 beds, two apartments in back, a full laundry with a full commercial kitchen. It’s set up exactly for what you’re talking about doing,” said Spurlock, during the workshop.

Kyle Prichard, pastor of The Hill Church who oversees the state-certified Live Free Recovery Program, spoke from the audience.

“You all are voting on something you’ve not even been in the building to look at? That’s kind of scary. There are other drug programs in the community that are willing to support this. This is a no-brainer. You got a building already ready to go. Let’s run with it,” said Prichard.

A Tazewell motel was the site last year of the kidnapping and assault of two people held at gunpoint in... read more